Our pre-cruise itinerary has been exclusively prepared for our Group alone (not part of the Amawaterways program) by Destination Asia. Everything is private to us!
VIP arrival, private transfers, professionally guided tours on two days, all admissions, deluxe room accommodations with breakfast, welcome reception and dinner, and one lunch are all included in the pre-Cruise package price of USD 540 per person based on double occupancy (50% single surcharge).
​Optional Vespa Tour USD 140 per person.

With a population of nearly 10 million inhabitants and an almost equal number of scooters, mopeds and motorcycles all competing for space on the ultra-busy streets, bustling and noisy Ho Chi Minh City is quite literally a metropolis on the move. The most western of Vietnamese cities, Saigon, as it is still commonly known, is a city of contrasts; a place where ultra-modern shopping malls and fashionable restaurants vie for space with local retailers selling all manner of wares and quiet roadside cafes making delicious Vietnamese iced coffee (cafe sua da) and other liquid refreshments. There is always something going on in Saigon and a friendly roadside cafe is the perfect place to take five, enjoy a coffee and absorb the dynamic scene unfolding around you.

Ho Chi Minh City is packed with first-rate museums and some elegant French-era colonial architecture, including the Central Post Office and the stunning Saigon Opera House. Away from the city centre, Cholon, where the treasure trove of temples are best explored on foot, is one of the most vibrant Chinatowns in South-east-Asia whilst Ben Thanh Market is the perfect place for a spot of retail therapy and souvenir-hunting. With so much to see and do, an international dining scene and some of the most luxurious hotels in the country, Ho Chi Minh City is a truly remarkable destination waiting to be explored.

Your arrival flight will be arranged by Roger (not included in package).
​From the moment of arrival, it's all VVVIP!

After clearing Customs and collecting your luggage, you will be met by your tour guide for the private transfer to hotel with introduction to the city en-route.

A sumptuous Breakfast at your hotel is included. 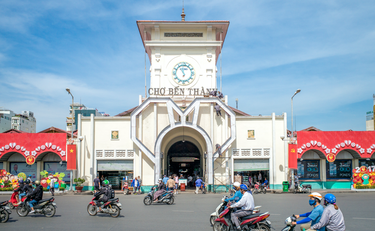 Breakfast at our hotel. ​Then it's time for a

Guided walking visit to nearby  Ben Thanh market for personal exploration and a spot of souvenir hunting. Bến Thành Market is a large marketplace in central Hồ Chí Minh City. The market is one of the earliest surviving structures in Saigon and an important symbol of Hồ Chí Minh City, popular with tourists seeking local handicrafts, textiles, áo dài and souvenirs, as well as local cuisine. 2-hour tour duration.

When it’s time we will be transferred to My Tho port where we bid farewell to our Destination Asia hosts and guides and will board the AmaDara.

Settle in and then meet fellow guests at a Welcome Dinner as the ship cruises to Cai Be.

Travel Insurance is NOT included in prices quoted but is strongly recommended.